I went out to take some photos of the new Bronze Birch Trees and it was so cold and grey that I am going to post every picture I took on here to make the most of the effort it took to leave my cosy spot in the living room!

We have woven the Birch Tree design in 4 different wefts on this Twilight coloured warp (one of which was just using up some extra yarn and so is a very limited run) . The Bronze and Winter linens will be released on Friday 10th Jan at 10am (our time), then the prebooking for the moonlit cotton will open at some point over the weekend, but I’ll tell you about that on a later update. Finally, the lambswool weft Birch Trees will be released in the next few weeks.

Here is a flat, black and white image of the full birch trees design. 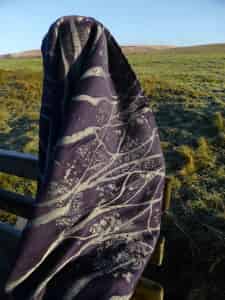 The Bronze trees are actually a happy accident; this linen weft was destined to be for the starmap design, and the deeper, burnt orange used for these trees, so we got a bit of a surprise when we collected the cloth, but we are really pleased with the results nevertheless!

The Bronze weft is an Irish linen too, and retains the sparkling linen shimmer, but this is a 2ply yarn making it beautifully soft straight from the bag just like the Italian linen that we  used on the first run. Both these linens are a similar weight- a medium thin yet supportive cloth. As with all of these linens, their iridescence makes it hard  to capture their true nature in one photograph so here is a whole series of snaps that give you an idea of the nature of this wrap.